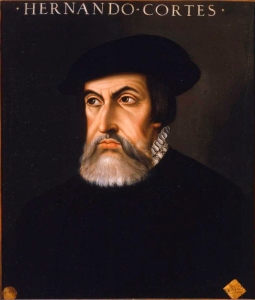 In part one of our series, Hernán Cortés organizes and leads an army to Mexico to seek out the rich lands to the west. He does all of this despite a confrontation with the governor of Cuba, Diego Velázquez.

In Mexico, the Spanish will find something they never imagined – the Aztec Empire. 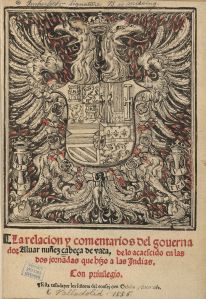 In the final chapter on Álvar Núñez Cabeza de Vaca, the soldier and three survivors of the ill-fated Narvaez Expedition set out on a 2,500 mile trek across the America southwest and northern Mexico in a bid to return to Spanish territory. The march would be one of the greatest journeys of survival – as well as exploration – ever recorded.

The best source you can have on Cabeza de Vaca is his own writings. La Relación is available online in various forms. Texas State University has a really nice readable online version. Or you can download the book at the Internet Archive.

There are numerous quality online biographies of Cabeza de Vaca. Here are a few:

All images from Wikipedia.

In 1528, Álvar Núñez Cabeza de Vaca would wash up on the shores of modern-day Texas – a survivor of the ill-fated Narváez expedition. His story is really not one of exploration – but of survival – as he would spend eight years living and traveling the southwest of the United States and northern Mexico. It is an incredible journey – one of the most unusual in the history of exploration.

In Part 1 of our tale, we recount the aftermath of the destruction of the Narváez expedition, Cabeza de Vaca’s years-long struggle to survive – and thrive – in an alien environment, and ultimately his first steps to returning tp a home he had not seen for many, many years.

All images from Wikipedia.