Skip to content
HomeNellie Bly and the Race Around the World

In 1889, a New York journalist, Nellie Bly, at the behest of her newspaper, the New York World, began a journey to civrcumnativage the globe. Her goal was to best Phileas Fogg – the hero of Jules Verne’s “Around the World in 80 Days.” Little did she know that a rival publication would send their own reporter on a similar journey – only heading in the opposite direction – setting up a dramatic race that would capture the attention of the world.

Nellie Bly and the Race Around the World – Part 1
In the first episode of the series, we get some background on 25-year old journalist Nellie Bly, and examine how she came to propose her daring round the world jaunt. We will then get her underway – departing New York City in November of 1889. Unbeknownst to her, a rival newspaper dispatched their own reporter to try and defeat Bly – setting up a competition that would enthrall the world.

Nellie Bly and the Race Around the World – Part 2
Nellie Bly sets out from Calais, France, by train, to the city of Brindisi on the eastern coast of Italy. After that, it is a steamship through the Suez Canal and on to Asia as she strives to best Phileas Fogg from the novel “Around the World in 80 Days.” Meanwhile, here rival, Elizabeth Bisland, lands in Japan, and heads west through Asia toward Europe in an attempt to upstage Bly.

Nellie Bly and the Race Around the World – Part 3
In January of 1890, Nellie Bly sailed from Japan in her race around the world. And while the ocean voyage would present its own challenges, a massive snowstorm in the American west would threaten Bly’s attempt to defeat Phileas Fogg – as well as her rival – Elizabeth Bisland.

The following is a rough map of Nellie Bly’s trip around the world, which started in New York City. Not all the stops are included – and the route is an approximation. But it should give you a basic idea of Bly’s route. 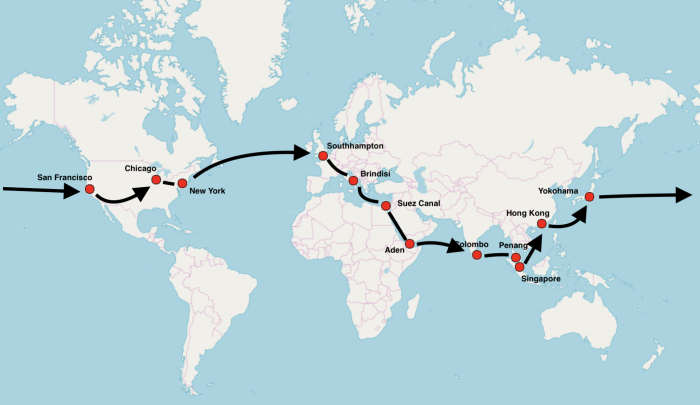 Here is a list of some of the best resources used for creating this podcast.

Eighty Days: Nellie Bly and Elizabeth Bisland’s History-Making Race Around the World by Matthew Goodman is the best chronicle of Bly’s journey that I found. It also goes into depth regarding the lives of Bly and Bisland.

Around the World in Seventy-Two Days is an online version of Bly’s book that she wrote after the journey.

In Seven Stages: A Flying Trip Around the World is Bisland’s version of the global adventure.

Wikipedia has an excellent over of the life of Nellie Bly.